Forty-three years after they had served in the Vietnam War, two veterans united at the Culver’s of Romeoville, IL. The emotional union began with a chance meeting of two women. Diana Anastazia, president of Project Join Us, met Tana Johnson, wife of Air Force veteran, Jim Johnson while preparing for a fundraiser at Culver’s. After hearing Tana Johnson talk about her husband’s experience in Vietnam, Anastazia knew she had to introduce him to her friend and Vietnam veteran, Major General John Borling.

The two men met at a fundraiser, hosted by Project Join Us. What was so special about their meeting was that John and Jim had almost met in the Philippines in 1973. Johnson was assigned as an aviator on the same “Operation Homecoming” plane that brought Borling back from a Hanoi prison, where he had spent six-and-a-half years as a prisoner. By meeting Borling, Johnson met someone who’s life he had helped dramatically change for the better, whether he realized it at the time or not. 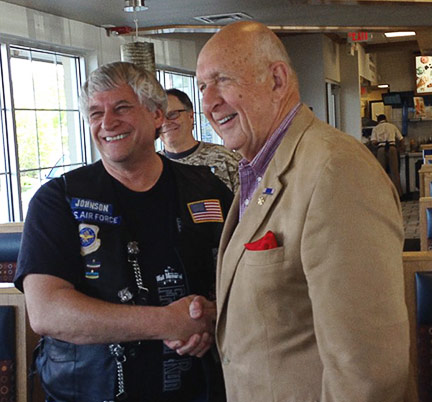 The meeting became even more meaningful when Borling brought out his private log with the names of the other POWs on the “Operation Homecoming” plane. Johnson was able to see the names of each of the servicemen he had helped bring home.

While planning the event, Anastazia realized Culver’s would be the perfect location. The franchisees, Ron and Debbie Dalrymple, would welcome the experience, and Johnson and Borling would appreciate meeting in a comfortable place with “yummy” food. Having the event at Culver’s, Anastazia explained, also gave the public and the restaurant’s team members insight into the sacrifices the veterans had made.

“The staff went above and beyond the call of duty to be part of all the festivities."

Anastazia’s efforts paid off. The two veterans were able to connect over their experiences in the war 43 years later, and the guests who attended were impressed. “People who came to eat loved the whole experience,” explained Anastazia. “Those who donated were happy and excited to see so many of us collaborating on a mission to raise money and put Americans and veterans to work.”