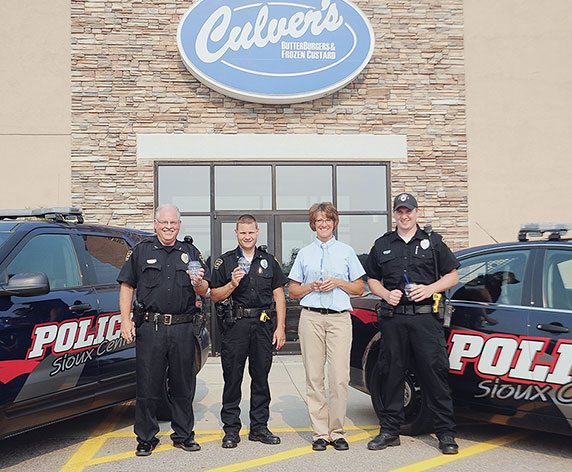 Most people try to avoid receiving a ticket from the police, but residents of Sioux Center, IA are happy to get them. Through the Cops and Culver’s program, the Sioux Center Police Department has begun issuing “citations” to people to reward good behavior – wearing a seatbelt or bicycle helmet, stopping for pedestrians, properly using turn signals or walking a pet on its leash. The “citation” includes a certificate for a free Culver’s Mini Mixer as a reward.

“The program allows police to have positive interactions with the community.”

The Cops and Culver’s program came to be when the Sioux Center Police Department was discussing how to reward good behavior in their community. Officer Josh Koedam suggested a positive twist on ticketing people. The police department reached out to Culver’s of Sioux Center franchisee, Angie Rodenburgh, who jumped at the chance to help the department make a positive change in the community, and the Cops and Culver’s program was born.

Rodenburgh said that community members who have been cited for safety have enjoyed the reward and love to share their “violation” when redeeming their citation. The program has been successful in showing the community, and especially children, that the police are a positive presence in Sioux Center.