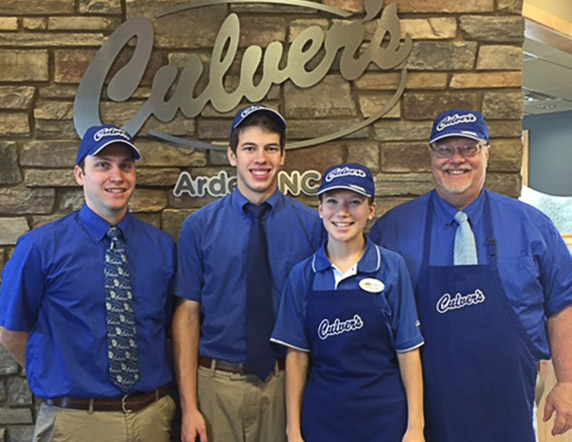 For Kraig and Tom Tabor, the father and son franchisee team behind Culver’s of Grovetown, Georgia, their dream was not to own any restaurant, it was to own a Culver’s. The Tabor family has fond memories of visiting Culver’s for family meals. “Every time we decided to go to Culver’s it seemed like my six children turned into eight children,” said Kraig. “It was like every kid in the neighborhood would jump in my Suburban when we’d go to Culver’s.”

Shortly after Kraig retired from his job as an engineer, the dream came true. His son Tom had moved to Georgia for an internship as a youth pastor. When the internship ended, however, Tom needed to find a new job and this seemed like the perfect time to realize his family’s dream of owning a Culver’s.

“I’ve been a customer at Culver’s since the day they opened.” – Kraig Tabor

Kraig agreed, and he and Tom went through Culver’s training program together. Kraig even moved from Wisconsin to Georgia, so the team could open the very first Culver’s restaurant in Columbia County, Georgia, in December 2016. Initially concerned about opening the restaurant in an area where few people were familiar with Culver’s, their opening day proved to be a booming success. “We had to do a good job, keep the building clean, and deliver good food and Frozen Custard,” said Kraig.

Tom and Kraig’s passion for working at Culver’s has since spread to other members of the Tabor family. Kraig’s wife, Kathy, and daughter, Katy, work at the restaurant regularly, and Tom’s wife helps with the accounting. In fact, all of Kraig’s children and their spouses have helped at the restaurant at some point. “Every father would like to spend more time with his kids,” said Kraig. “I get to see my children every day.”

Interested in owning a Culver’s franchise like Kraig and Tom? Visit our Own a Culver’s page to learn more about franchising opportunities.