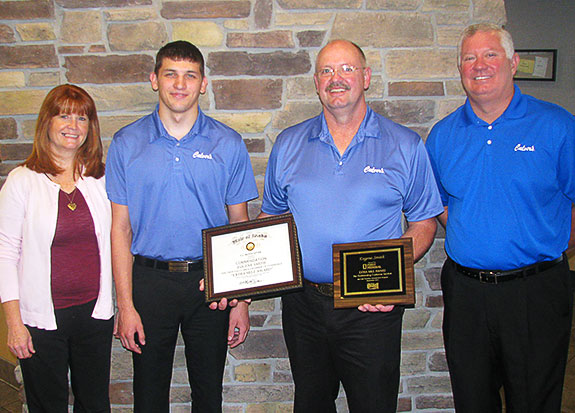 Sometimes a small act of kindness can go a long way. Franchisee Eugene Smith from Culver’s of Twin Falls, Idaho experienced this when the Twin Falls Chamber of Commerce presented him with the Extra Mile Award for going above and beyond in his local community.

A Facebook post by Culver’s guest Lauren Taylor led to Eugene receiving the award. Lauren wrote about how she had been having a bad day when she and her sons pulled into the Culver’s drive-thru. Upon arriving at the window, Lauren discovered she had forgotten her wallet. Embarrassed and frustrated, Lauren explained to Eugene that she couldn’t pay for the meal. Eugene surprised Lauren by offering the meal free of charge and even throwing in a Sundae to brighten her day. Lauren posted a heartfelt thank you on her Facebook page, in which she wrote. “I must have said thank you half a dozen times, but I was so overwhelmed by your kindness I couldn't even speak any other words.”

"Thank you so much for showing kindness, mercy and compassion today." – Lauren Taylor

A representative of the Twin Falls Chamber of Commerce saw the post and nominated Eugene for the Extra Mile Award. When Eugene was chosen for the award, the restaurant’s general manager worked with the chamber to arrange a surprise award presentation for Eugene. A group of about 30 people, including the mayor of Twin Falls and Eugene’s daughter, who flew in from Iowa, surprised Eugene at his restaurant. The chamber of commerce presented him with a plaque from the governor.

"It was an honor that people realize when you do the right thing." – Eugene Smith

“It was a total shock to me,” Eugene explained. “I was a little overwhelmed and felt a little funny for being recognized for doing the right thing, but it was an honor.” Eugene’s hospitality is an example of the great service that Culver’s strives for each and every day.