We Love Serving Our Communities. Let us safely make a meal just for you. Expand

Franchisee Eric Johnson never regrets his decision to leave his job as a college football coach to become a Culver’s franchisee. While he enjoyed coaching, his new career allows him more time to spend with his family. He now owns three Culver’s restaurants in Tennessee.

Eric loved his coaching career at the University of Iowa, where he helped to recruit top-ranked classes of players, but the busy schedule was taking a toll. After 15 years of regular practices, traveling to games and recruitment events, Eric decided he needed a break. That’s when a friend recommended he consider opening his own Culver’s restaurant. 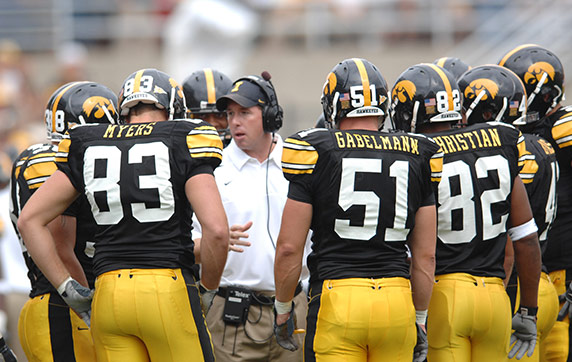 Working for Culver’s hasn’t meant that Eric had to totally give up coaching, however. He looks at running his restaurants as coaching a team, being a role model to his team members and encouraging them to be positive. The most fulfilling part of his job, Eric explained, is seeing them grow in their positions. “I wanted to be able to mentor and coach others,” said Eric. “It’s rewarding when team members tell you that working at Culver’s is the best job they’ve ever had.”

“I love getting up and going to work.”

Leading his team members isn’t the only rewarding part of Eric’s job. He also loves seeing guests having positive experiences at Culver’s. In fact, Culver’s focus on hospitality is one of the reasons that Eric chose Culver’s when looking for a new career. Another reason was Culver’s family values; he loves that he now has free time to spend with his wife and three children. After years of coaching, that is the biggest win.