Culver’s restaurants help out communities across the country. It’s not often though that a restaurant has a connection with a tiny village halfway across the world.

This story starts with longtime guests of the Culver’s of Wales, WI, Dave and Shirley Locklin. The Locklins approached the restaurant in late 2016 to see if they would like to make a donation to a village in Burkina Faso, West Africa, where their daughter works and lives, and where they would be visiting in December.

Ron Milazzo, a general manager at the restaurant, got the idea to donate some Culver’s soccer balls to the village. When he saw the photos that Dave and Shirley took when they presented the balls to the children, Ron was amazed. 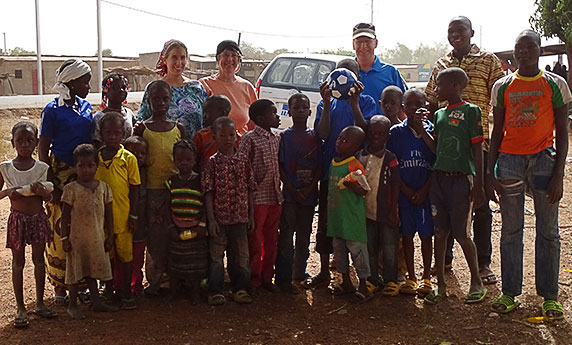 “I was in awe at how such a small gift truly made these kids’ day,” Ron said. “The things we take for granted and are commonplace in America mean much more to those in need. It truly made my day to see the joy in those children’s eyes.”

According to the Locklins, the children loved the balls and immediately took off running to play with them.

“It truly made my day to see the joy in those children’s eyes.” – Ron

Photos from the trip and a letter from the Locklins describing the children’s reactions now hang in the restaurant’s dining room as a reminder that sometimes the smallest things can make the biggest difference. “It was an honor being able to see the outreach of Culver’s,” Ron said.