In 1961, Craig’s parents, George and Ruth Culver, opened their first restaurant and began developing their approach to success. Ruth served guests with her warm and gracious hospitality, while George commanded the kitchen with the firm belief that you should never cut corners on quality. This dedication to quality and hospitality led them to open the first Culver’s restaurant in Sauk City, Wisconsin, in 1984.

Here in the Culver’s kitchen, George was able to spend time perfecting his special chili recipe. This now-signature creation became known on the Culver’s menu as George’s Chili. Initially, the thick and hearty dish was available only during the winter months, but as Culver’s restaurants spread to warmer locations and the chili grew in popularity, restaurants began offering it year-round.

George’s® Chili is a medium-spicy chili con carne made with simmered homestyle beef, diced tomatoes, dark red kidney beans, peppers, onion and celery, along with a secret blend of peppery spices. You can make it “Supreme” by adding sour cream, cheese and onions. 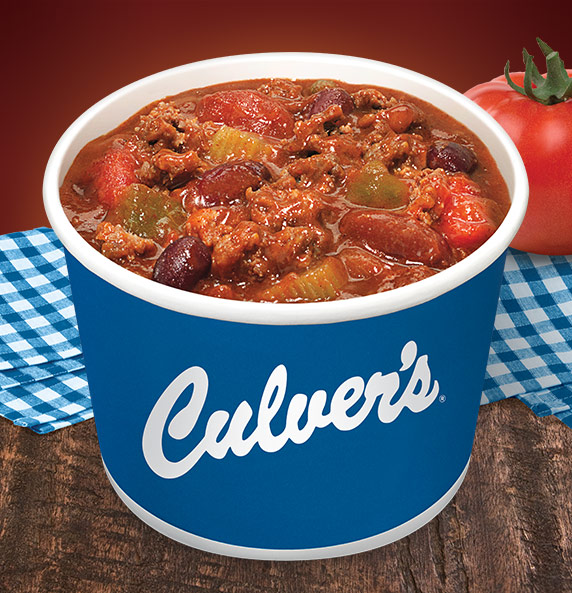 You don’t have to be in a soup mood to enjoy this savory selection, either. Try our Chili Cheddar Fries, made by topping our crispy Crinkle Cut Fries with George’s Chili and Wisconsin Cheddar Cheese Sauce for a side that’s a tried-and-true masterpiece.

However you decide to enjoy George’s Chili, you’ll be able to taste the time and care George put into perfecting his special recipe, which over thirty years later is still made following his rule: “you should never cut corners on quality.”